PLEASE NOTE: this page is best viewed landscape when viewed on a tablet.

With the advent of subsequent expansion of the tourist trade in the Hindhead area in the 1890s there was good scope for the carriage of goods and passengers to and from Haslemere station etc.

During the early period of commercial expansion in Grayshott (1895/1910) there were at least three carriers in business, Edmead Bros.; J. Sandell; and W. Funnell, together with 3 livery and bait stables offering horse drawn vehicles for hire, B. Chandler; H.S. Winchester and A.J. Moore. Also M Larbey from Haslemere was offering a general carriers service between Haslemere, Hindhead and Grayshott.

J. Sandell began his carriers business around 1901. Many years later in 1931, he sold out to the Aldershot & District Traction Company following the introduction of the Road Traffic Act. This Act gave immense commercial power to the major transport operators who were substantially owned by the railway companies. In turn these railway companies operated large fleets of motor lorries for the carriage of local goods. There was little room for the small operator.

The Aldershot and District Traction Company soon established themselves in the area taking over garage premises at Clay Hill, Haslemere in 1914. Expansion of military camps in the area brought prosperous times for the company both with the carriage of passengers and haulage work for the military authorities. In 1931 a new garage to hold some 45 vehicles was opened at Hindhead. The Company was affectionately referred to locally as the ‘Tracco’ and was a major employer in the area. It continued under the A & D brand name until 1971.  The original Clay Hill garage was demolished in 2010 for redevelopment. 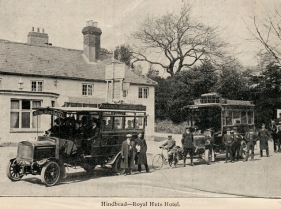 During the 1920’s Grayshott became well served with buses. The central village stops were outside the ‘Fox and Pelican’ and a little further down on the opposite side of the road.

There was an hourly service No.24 to Guildford and Petersfield, and a half hourly service No. 18 to Haslemere and Bordon. During the 1930’s with the introduction of the new lightweight 20 seat Dennis buses service No. 17 operated to Farnham, these small ‘buses being known as ‘whippets’. All this continued little changed until the 1970’s, by which time bus travel was well in decline owing to private car ownership and the local services were reorganised under National Bus Company ownership.

In 1954, Sidney Jefferys came to Grayshott from Haslemere and took over an existing garage business in Headley Road. Soon he started a private hire operation using a 28 seat Guy coach. This was followed by second-hand wartime Daimler double-decker for use on contract work. Sidney Jeffreys moved his bus business across the road to ‘Rose Cottage’ this being the former premises of John Sandel’s carriers business and expanded it with the addition of local school contract and private hire work. Paul Jeffreys took over the business on his father’s retirement in the early 1970s and moved it to Bordon. Rose Cottage, across from the Royal British Legion Club was then pulled down and replaced with ‘Headley House’, a block of modern offices. At the present time (2007), service No.18 is operated through the village by Stagecoach Ltd. This service connects Guildford with Haslemere, Hindhead, Grayshott, Bordon, Farnham and Aldershot.

The following pictures further illustrate the development of public transport in Grayshott.

Introduction
Some of the earliest references to the road go back to the 17th century when pioneer road map maker John Ogilby included ‘Hynde Head’ in his 1675 first edition of ‘Britannia – A Geographical and Historical Description of the Roads of England and Wales’.  William Cobbett in his ‘Rural Rides’of 1822 quotes ‘Hindhead, that miserable hill, the most villainous spot that God ever made’.  Quite possibly many travellers of these recent times when queuing at Hindhead have come to similar conclusions.  To all of us living locally ‘The Portsmouth Road’ is a household phrase, at times cursed but also giving us all access to the channel ports, airports and the British motorway network in general. Soon with the opening of the new road tunnel life around here will change forever.

History
The Saxons and Romans constructed the basis for the road network in this country but from when the legions were withdrawn from Britain in AD 411 it was not until 1555 that the first general act was passed, not for road construction but for repair.  Earlier an act was passed in 1285 directing that ‘highways’ leading from one town to another shall be free of ‘dyke, tree or bush whereby man may lurk to do hurt within two hundred yards on either side of the way’.  This measure was designed to protect travellers and had no concern with the repair of the road.  Expanding trade and commerce led to roads getting into even worse condition than previous.
It is claimed that Sameul Pepys stayed at the Anchor Hotel in Liphook when Secretary to the Naval Board in 1661, so the road was being used by travellers from London to Portsmouth which was already well established as a naval base.

The road network in this country was in a deplorable state and in 1663 Justices of Hertfordshire, Cambridgeshire and Huntingdonshire made representation to Parliament for a Private Act to operate a ‘Toll Road Trust’ on the London to York post road through their area.  This became the first English Turnpike Act and was to become the Great North Road.  With the granting of this, many similar representations were made and granted so by 1770 there were almost 500 trusts and by 1829 some 1,119 trusts were controlling 19,798 miles of road.  To achieve this it was estimated there were over 3,783 Private Acts of Parliament.  In 1712 the Edinburgh to London coach took 13 days and the fare was £4 -10s with a free allowance of 20lbs of luggage.  As a condition of the granting of ‘Trust’ status the roads first had to be put into a good state of repair and income used to maintain them as such.  These ‘Trusts’ were formed by groups of local people and as trustees were responsible for collecting the tolls with gatehouses and toll bars being set up.  Considerable sums were borrowed and by 1829 a total debt of £7,785,171 has been incurred with worse to come by 1865 the figure had reached a staggering £9,000,000.  Pedestrians were free, toll collectors absconded with takings, double charges on Sundays unless travelling to church and often long queues formed when disputes broke out over charges based on weight.  From the 1750s milestones had to be erected along the route.  To travel from London to Scarborough in 1772 would have cost £22 in 19 stages of tolls and from London to Edinburgh in 1798 the 39 stages would have cost the traveller £36-11-7d.  Within this system in 1764 the Milford to Portsmouth and in 1768/1792 the Kingston to Sheetbridge (north of Petersfield) acts were passed by Parliament.

The original route took the road across the top of ‘Gibbet Hill’ aptly named as such but in 1826 the Trust built a new road at lower level around the punchbowl on the line that it is today.  At date unknown but probably during the late 1700s a small inn was established on Hindhead later to become known as the ‘Huts Hotel’ and after about 1900 the ‘Royal Huts Hotel’.  Because of the inhospitable terrain and chance of robbery the route across Hindhead was not preferred by most travellers, many of whom were sailors making for Portsmouth.  The alternative was from Milford to Haslemere and then either to Midhurst and Chichester to Portsmouth or from Haslemere to Liphook and on.  Growing in importance as a mail coach road gradually more people used this direct route and by 1820 there were at least 24 coaches crossing the hill daily.

These toll roads were gradually abolished during the 1870s and responsibility handed to local Highway Authorities with all toll or turnpike roads becoming main roads.  With the introduction of the Highways and Locomotive (amended) Act of 1878 authorities were given leave to reduce the status of some main roads to that of ordinary roads.

The advent of the Portsmouth ‘direct’ railway opening in 1859 finished the mail coach trade and not until 40 years later did Hindhead rapidly expand to become a tourist haven from the 1890s onwards.  Pioneer motorists including S.F. Edge lived locally and in November 1900 a motor run was organised from London to Portsmouth via Hindhead.

There was much criticism of the road surface in particular that between Hindhead and Liphook, many entrants took too long for lunch at Godalming thus arriving at Portsmouth well after nightfall.  Ben Chandler, proprietor of the ‘Royal Huts Hotel’ pioneered motor bus services in the district and later established a considerable garage business at the top of the hill (now Barons site).

The Roads Act of 1920 brought about considerable alterations and a new road numbering system was introduced, the Portsmouth Road becoming the A3.  With the rapidly expanding interest in motoring the ‘A3’ brought many visitors to the district with charabanc outings being very popular.  From the mid 1920s express coach services commenced between London and Portsmouth with several private operators competing with each other until the Road Traffic Act of 1930 effectively put an end to the competition and Southdown Motor Services then had the monopoly for many years, the smart green and cream coaches being a familiar site at the refreshment stop at the ‘Royal Huts Hotel’.  In post World War two years summer motoring in the form of days out to the seaside along with many coach outings made good use of the road again patronising the ‘Huts’ as a mid way stop.  Unfortunately with the ever increasing popularity and usage, the motor car became a victim of its own success, long queues formed each side of the traffic lights on summer weekends this gradually turning into a daily occurrence when the increased volume of local traffic became mixed with commuting and through traffic.  Now the tunnel is to alleviate much of this…..

View the gallery to this article here.

Further reading: A published work on this subject which gives a very interesting insight into the entire subject of roads, commerce and communication is ‘ A History of Inland Transport and Communication in England’ by Edwin A. Pratt. Published Kegan Paul, Trench, Trubner & Co. 1912.  Generally available from second handbook sellers at ABE Books online.